The skinny on Goats for beginners 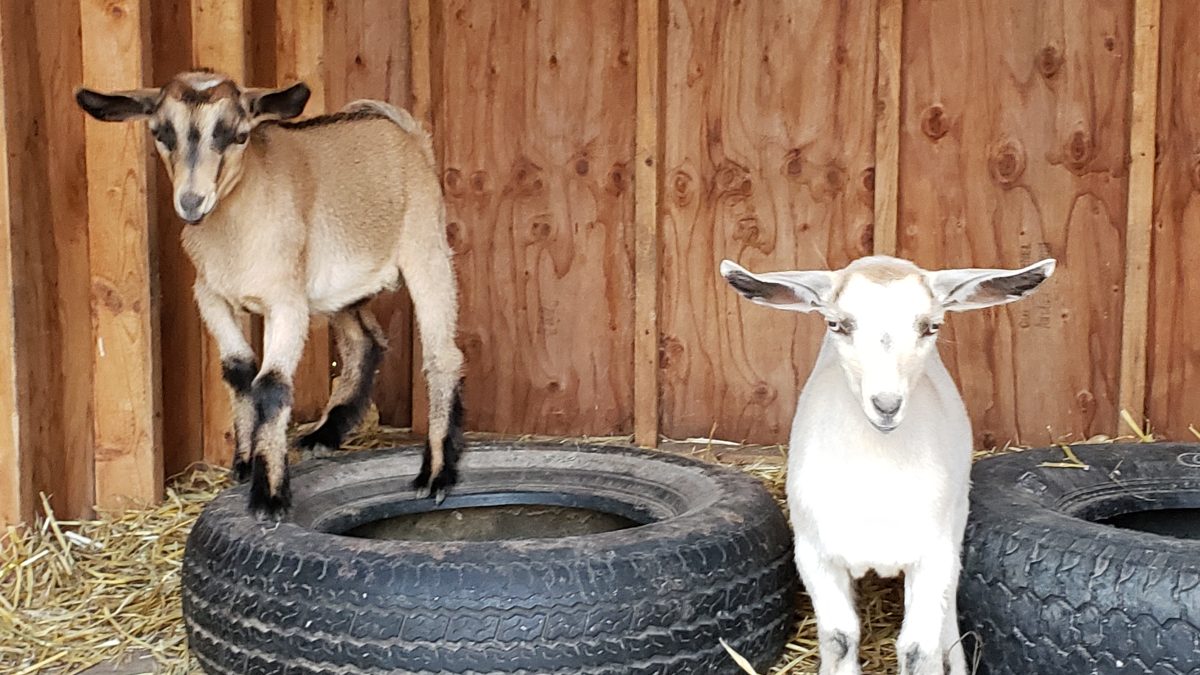 I generally find that people have one of two reactions to goats: they go absolutely bonkers over them OR they have a very strong antipathy toward them. And now having owned goats these last several years I can tell you, some days I feel both of those sentiments toward my goats. 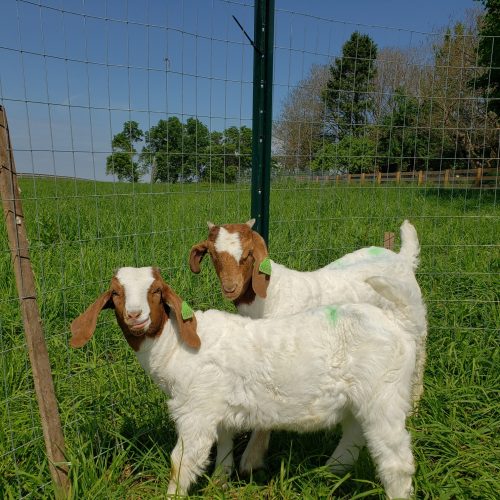 Curly and Clovis, the Boer goats that started it all for us

We started with Boer goats –  that is a meat goat originating from South Africa. It kind of looks like a goat fell in love with a Jack Russell terrier and they had babies.
After 4-H was finished and our Boer goats were sold, my desire was to get into dairy goats. We started with Nigerian Dwarf and eventually got into Alpine as well.
I wanted to give people who are thinking of getting into goats and overview of what’s important to know, If you are just getting started and already have your goats I’m hoping there’s some information here that is helpful.
Goat lingo:
Buck – a male goat (a buckling is a young male goat)
Doe – a female (a doeling is a young female goat)
Wether – a castrated male goat
1)  First of all, You don’t get just one goat.  If you are considering getting into goats it is very important to have two.  They are herd animals.  If you have sheep yes goats and sheep can get along together. However a sheep does not replace a goat for another goat as far as companionship.  Goats graze together, sleep together,  They enjoy Reposing in the field chewing their cuds together…goats need to be with other goats.
In fact when we visit other farms To look at breeding stock, Billy goats or bucks are always kept with a wether. Even though they are sectioned off from does and other bucks,, we will always see that on a reputable farm, a wether is kept with them in their run.
2)  Another valuable tool for me in raising goats successfully was having a mentor. Now I am an advocate for mentors in many walks of life and with many kinds of animal husbandry.  I connected with a woman at a farm in a neighboring town, Originally to check out her stock potentially to breed.  I ended up meeting with her twice and  Just listen to her tell me a wealth of knowledge knowledge on goats and on having a goat for a safe kit and how to stock it and what to do with all these different potential symptoms in your goats etcetera.
She had been raising goats for 30 years and just was so helpful. Not only that she asked me to please keep her Contact info handy in case I had any questions.
So while the Internet is such a helpful go to tool, there’s something about having someone local. I didn’t know prior to getting into goats that the parasites and in different regions of the country are often different and so what you used to treat them may or may not be as effective. Also the bacteria that they test for in milk oats maybe his comment in your state or maybe it has never shown up in your state.  Neither did bits that are helpful to know
3)  Goats need minerals. 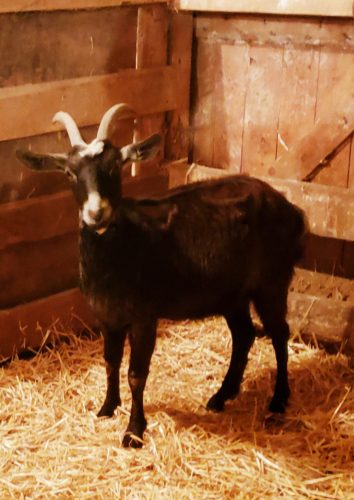 Goats with a mineral deficient can I have all kinds of health and reproductive issues.
A dull, lackluster coat in a goat can be a sign of copper defficiency.  And if you have goats and sheep  together, it is important to know that while copper is vital to goats, it’s toxic to sheep.
Giving a doe Vitamin E and selenium during breeding season improves the chances of her getting pregnant with multiples.  Low selenium can also lead to to muscle disease.
Vitamin B/ Thyamine Is something I always keep on hand.  Last summer we had an extremely hot day and and one of my bucks was exhibiting symptoms of goat polio, which is not really polio.  But he was overheated and kind of spinning and circles and stargazing.  And I called the vet immediately but in the meantime I got him into the barn and and hit him up with a shot of vitamin B,  And he was better within an hour.
4)  Goats are notorious for managing to get into places they shouldn’t.   Thet are born gymnasts who find ways to hop over or jump into places you never imagined.  If there is a prospect of something tastier on the other side of the fence, they will try to hop it.
5)  Goats have a reputation for eating anything and everything.  But while they might nibble when things out of curiosity but I have generally not found this to be the case.  Sometimes I think my sheep are worse for chewing on things they shouldn’t.
One thing that is pretty amazing about goat diet is that they tend to graze and move on and they love to eat the coarser vegetation such as shrubs and weeds and thistles.  I found it incredible that  goats can eat blackberry branches and the thistles don’t bother them at all. 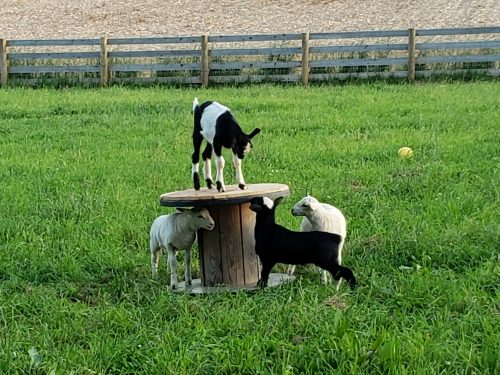 Speaking of goat diet, one very important thing to know is that Azalea and rhododendron can be fatal to goats.
6). Another interesting tidbit about goats is that a little bit of free choice baking soda can go a long way in keeping their rumen healthy.  (And baking soda is fine for sheep to have as well and can also help in regulating their rumens). Usually I find that if they need it, they will ingest it, and if they don’t they won’t.  So again, you can just offer that free choice.
7)   Just like chickens have pecking order, goats have their own hierarchy within the herd.  The lead doe, or Queen, decides where the herd will venture out each day and eat.  She’s also first in line for feed when it is dinner time.  When foraging, the rest of the herd follows her lead.  Where each goat falls in the herd is determined by their efforts to assert themselves. When a new goat is introduced, it is common to see other goats rearing on their back legs and pointing their heads or horns toward the newcomer.  And like chickens, while it can be worrisome to watch this behavior, they generally need to sort this out among themselves.
8)  Goats enjoy climbing climbing on objects and  Instinctively desire to be up on heights. Instinctive in goats from their days in the wild is the need to attain heights to escape predators or to forage for vegetation containing trace minerals. You can delight your goats by placing a picnic table, jungle gym, or electric spool in their pasture for entertainment.
Happy Goatherding!
Share